Restless Legs Syndrome (RLS), also known as Willis-Ekbom Disease, is a neurological disorder with established effects on the quality of life and health. According to the National Institute of Neurological Disorders and Stroke (NINDS) 10% of Americans experience RLS, including nearly 1 million school-age children. RLS symptoms in children may include “growing pains” or problems with “attention and hyperactivity disorders” RLS can cause difficulty falling or staying asleep which can be one of the chief complaints of the syndrome.

RLS symptoms can range from the very mild or transient (a few times during pregnancy) to severe, occurring every evening and being excruciatingly painful.

In order for you to be diagnosed with RLS, you must meet the criteria in the four bullets below:

Research in the area of RLS has advanced over the last few years. Restless Legs Syndrome is suspected as being due to either a deficiency or to a lack of sensitivity to brain dopamine levels. Dopamine is an important neurochemical in the brain that is involved in sleep, movements and the control of pleasurable emotions.

Low blood iron levels are often lower in RLS patients (typically below 50 micrograms/liter). There has been a growing realization that low brain iron metabolism may be a critical pathway in the development of RLS. Iron deficiency can also produce anemia (low hemoglobin and red blood cell count) and fatigue.

Genetic factors are strong predictors of RLS. Restless Legs Syndrome commonly runs in families, especially when it is severe and starts early in life.

Environmental factors and other medical problems are also associated with RLS. Most notably, RLS may be start during pregnancy. In addition to iron deficiency, RLS can be caused or worsened by renal failure, back pain issues, and is likely more frequent in people who have damaged peripheral nerve ending, such as in those with diabetic peripheral neuropathy.

The sleep specialists at Iowa Sleep may treat RLS with lifestyle and behavioral interventions, or if indicated, pharmacological treatments.

Non-drug treatment may include: iron and vitamin supplementation (especially if anemia or iron deficiency is present), removing medications that can aggravate RLS such as some neuroleptic, antihistamine, and antidepressant medications. Other non-drug treatments may include eliminating alcohol or caffeine intake, exercising, walking, stretching, taking hot or cold baths, massaging or relaxation techniques.

Drug treatments may include dopaminergic agents, gabapentin and opiates. Other sleeping aids, anticonvulsants, and pain relievers may also be used. Frequent adjustment of medications and treatment duration may be needed to get the best response. The dopamine agonists approved by the Food and Drug Administration (FDA) for the treatment of RLS, include ropinirole (Requip), pramipexole (Mirapex), and rotigotine (Neupro). The Alpha2-delta ligands approved by the Food and Drug Administration for the treatment of RLS is gabapentin enacarbil (Horizant). All drug treatments may produce side effects, and must be prescribed by your sleep specialist. 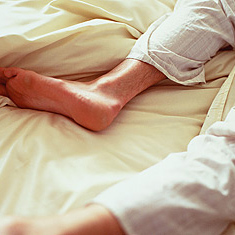 If you suspect you have a sleep problem, make an appointment today to discuss a plan that works best for you.Call Iowa Sleep at (800) 226-6084 TOLL FREE.